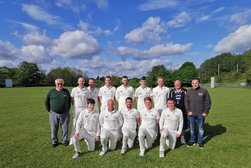 KFCC: Our season so far

The start of the 2022 season has created a buzz of excitement and promise for Kelvedon and Feering Cricket club.

There is a new kit (thanks to RED sportswear), 15 new sponsors, new covers imminently
arriving and a newly found winning record on the field. The positivity has spread across the whole club. The club has enjoyed live music and excellent turnouts from juniors and parents at our Friday dynamo sessions. Thursday night training sessions have also been heavily attended by adults and senior colts, all keen to soak up advice from our first team coach, Pete Yates.

On the field, our ladies’ side have won once and lost once. They’re an incredibly friendly and welcoming team, who have boasted some very talented cricketers ever since Ruth West set up the side, a decade or so, ago.

Our U13s colt side have won twice already this season and our u15s have also come out as victors in their opening match of the season. It’s becoming increasingly apparent that there are some great prospects for the club in the current youth set up and these colts are already beginning to shine in adult cricket. One of these colts is Torin DeSilva, who ripped through Copford in our Sunday T30 development side, with figures of 4-11. This development side have won their opening fixture of the season, not only thanks to the excellent bowling of Torin, but also due to 2 half centuries from the experienced Mark Cottee and Ash Griffiths.

On a Saturday, our first and second XI’s have performed brilliantly. Our second XI, who play in Division 9 South, have won all 3 of their opening matches. There have been excellent colt performances in this team with the ball. Jamie Manning picked up 3-31 against Frinton and Tommy Callander an excellent 4-42 against Real Oddies. Tommy’s impressive bowling helped him to make his first team debut, the following week and shows the path for progression is well and truly open for colts to succeed. George Barton picked up the figures of the season, so far, with 5-13 against West Mersea. With the bat there has been a sparkling 81 for James Reed and scores upwards of 40 for both Charlie Wild and Jack Hyslop, who have both returned to the club this year.

Our first XI are currently third in division 2, winning 4 of their opening 5 under the leadership of new club captain Lee Scott. Their one setback was to Braintree, in a game they really ought to have won having been 82-0 off 12 overs. Their victories against Copdock, Bury St Edmunds, Haverhill and Dunmow have included some exceptional performances. Dan Wheeler has thumped two aggressive half centuries, whilst Potter also manoeuvred the ball for a well crafted 50 against Bury. There have also been two centuries. Alfie Long made an opening day century, including some exceptional caressed cover drives. Josh Parsons also has a ton to his name, which included 7 maximums and only
took him 16 balls to move from 50 to 100. With the ball, Rich Nunn has bowled with energy, but his fellow new ball partner, Alex Holder, has made a habit of removing top order batsmen with in swinging yorkers at pace. Spin duo, Tristan Peperell and George Curtis have also tangled opponent batters with their flight and guile. The latter, Curtis, already has 14 wickets, including figures of 6-37, 4-58 and 4-2!

Both Saturday sides have a long way to go in the season, but if early form continues, a promotion push is on.